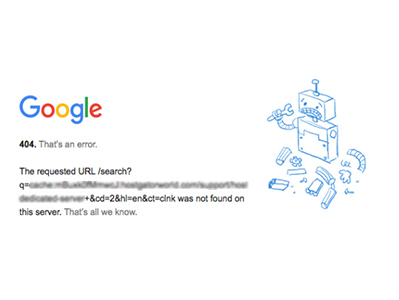 John Mueller the senior webmaster trend analyst from Google conveyed it on Reddit that just in case if your cache link on Google is returning you with a 404 error, then it’s nothing as such for you to get worried about the rankings because it won’t be affecting your rankings on Google. He said that “Google Cache Server 404 Internal Issue “can happen and it doesn’t mean anything serious!

So, if you are still worrying about your page being de indexed or about the drop in your ranking, they free up your mind because Google, it’s nothing for you to be concerned about! The issues which people were concerned about the Google Cache Server 404 Internal Issue is subjected only with the Google cache server, which eventually won’t be reflected either on indexing or the rankings of your web pages.

Google’s senior webmaster trend analyst also shared that in the past, all those pages that never had a cache link attached to it are not, by default, as the main reason behind the error was the lower quality.

The issues on the Google web page cache can be easily found out by the index coverage problems or by using any of the URL inspection tools. But it is always a good option to be extra cautious about the rankings of your page, as no one can afford to affect their Google SEO’s web pages, especially in the context of the rankings in the search results so as to get rid of bad effect or the bad impact on your website. So as mentioned John Mueller it is not more a thing you should get depressed about!

It was before this, that everyone used to suffer from this problem which at that point was huge! But after analyzing this issue thoroughly that outcome was quite clear, the problem is not that enlarged because after all ,what we want is to safeguard the ranking of our website !In fact, even Google search engine is also not penalizing this error ,which makes us quite clear that we are in the safer situation right now!

While you check the very first thing that you must be considering is that what sort of error or issue your webmaster tool is depicting in front of you in your search console regarding your website and after you get to know that it’s always a better option to try to solve it on our own.

While you check the very first thing that you must be considering is that what sort of error or issue your webmaster tool is depicting in front of you in your search console regarding your website and after you get to know that it’s always a better option to try to solve it on our own.

Conclusion
After going through the various statements it’s pretty sure that if you are facing with “Google Cache Server 404 Internal Issue” then it’s nothing for you to get worried about as it won’t be affecting the ranking of your webpage!